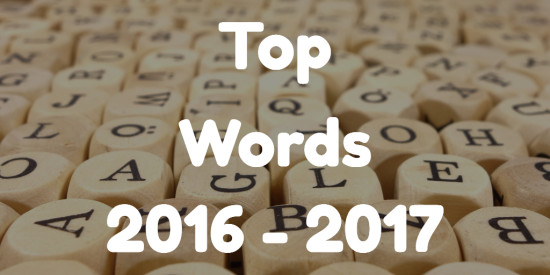 At the end of every year, we see a list of new words people started to use a lot and are being included in dictionaries as colloquialisms at the very least. We also come across popular words that always existed, but weren’t used much until some major event or trend triggered a revival.

To make this more fun, we’ll also look into the crystal ball and make some predictions for the top words in 2017. Feel free to contribute! My crystal ball is a little cracked, so the picture isn’t too clear. If you happen to have an HD crystal ball, I’m sure you could contribute!

Post-truth. If you don’t know the meaning of this word, you’d better learn it now. As you can tell, the prefix “post” means “after” and that’s followed by “truth” so this literally means “after the truth.”

However, as far as I can see, it hasn’t got anything to do with what comes after the truth. Rather, it relates to something that happens completely outside of the truth, or at least is assumed based on flimsy evidence. It means thinking with your emotions and how you feel about things, rather than looking at facts. Apparently, it’s quite the trend these days, so switch off your smarts and go with your gut. Woohoo! Suddenly, we all become geniuses!

Brexit. No list of 2016’s new words would be complete without Brexit. Initially coined to describe the UK’s exit from the European Union, it has now come to mean anything that’s anti-globalization. It’s also seen as implying passionate nationalism. I suspect that several other words will be coined to follow it, and we’ll go into those a little later.

Trumpism. As you can tell, 2016 was a year for politics with the gloves off. It’s been such a weird year that we’ve had to create new words to describe some of the new phenomena. Trump, love him or hate him, has certainly come up with a new post-truth style, and the utterances that arise from this have become known as “Trumpisms” this year.

Sharenting. Luckily, it hasn’t all been politics. We still have social media for those “OMG! Little Johnny’s got his first tooth!” moments. Go ahead, show your sharenting skills and post that pic. After all, I post pics of my kittens, and we can have some blissful relief from political discussion by entering an argument about which is cuter: your baby or my kittens!

Uberization. Wow! Guess what? Spell check already recognizes this one. As you may have guessed, Uberization relates to the so-called “sharing economy” in which service providers offer services directly to prospective clients for less than they’d pay if they went through a company.

Merriman-Webster lists these words as having been wildly popular in 2016.

I’m going to TRY to stay clear of the political minefield in my predictions. Am I cowardly? Yup! Some things are just not worth dying for, and feelings are running rather high at the moment. There’s just one political word prediction from me, and that’s “Nexit.”

What does Nexit mean? Whoever’s next to exit the EU, of course! It could be a Frexit, or a Grexit, or a Dexit, or we could segue into a Swexit, but unless the UK ends up having a really, really hard time as a result of its decision, someone’s going to follow suit. Any bets?

I can already see some words starting to trend, but I’m afraid they’re political too.

Then I suppose I should be a little creative too:

I’ll enjoy revisiting my list at the end of 2017 when we’re ready to enter into 2018. To be honest, I look back fondly to the time when “selfie” was the number one word of the year. At the time, I thought it a warning symptom of a culture of narcissism, but compared to 2016’s words, it was positively cheerful!