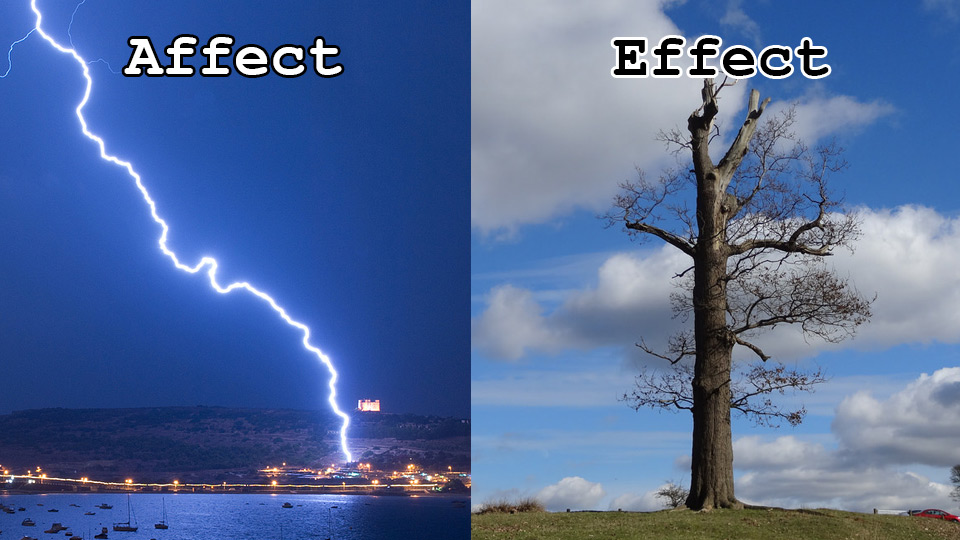 Don’t let the difference between affect and effect affect your self-confidence. Learning these two words is a cinch.

You might get away with not knowing the difference when speaking, as these two words are usually homophones (soundalikes). But your basic spell-checker won’t always catch a usage error if you type a correctly spelled version of a word.

In their most common usage, affect is a verb and effect is a noun. But each word can be either part of speech. Don’t worry! We’ll clear up the confusion for you.

But the most common definition of affect is “to alter” or “to act upon.”

If you don’t already know the facts, there’s no way to tell whether the gas pockets make good or bad changes—or both.

Here are some more examples:

Okay, so all three of these examples sound as if affect is only used in the sense of a negative change. That isn’t always true. Check out these sentences:

Did my brother’s haircut turn him into a rock-star salesperson, or did it turn off his leads and prospects? There’s no way to be sure, as affect is a neutral verb.

Of course, most people know that alcohol impairs your ability to drive. But if you want to be super-clear to your audience, you may want to choose a more specific verb than affect.

Again, affect usually means “to alter” or “to act upon.” A great way to distinguish affect from effect is to remember that affect, alter, and act all start with “A.”

Other meanings of affect as a verb

You’re going to run across other cases where affect is a verb, but with a different meaning. In fact, you’ll see several dictionary definitions of affect. Here are a few:

Luckily, most of these definitions aren’t all that common anymore. Just focus on the primary definition that we’ve explained in detail above.

Affect as a noun

Wait, what? That’s right: Affect can be a noun. But again, don’t worry too much about this, as you’re not likely to confuse this affect with an effect.

For one, affect as a noun is pronounced differently than the verb. The noun form has its stress on the first syllable and a short “A” sound.

Also, this word is more commonly used in the realms of medicine and psychology. The meaning of affect here is “the signs of an emotional state.”

For example, a psychiatric client may be described as having a flat affect. This means that, regardless of the client’s inner experience or feelings, they appeared to the observer to have no emotion at all.

So, if you see affect used this way, you’ll surely be able to understand the difference.

Now, is effect a verb or a noun? Well, again, it’s both. But we’re going to clarify the word for you.

An effect is an end or event. Here are some more examples:

Do these sentences sound familiar? You got it: They’re almost identical to three of the examples for affect.

This shows that affecting something yields an effect. This pair of words is simply two sides of the same coin.

You may have noticed that using effect instead of affect lengthens these sentences unnecessarily. Choosing strong verbs is a sign of advanced writing, so using affect is theoretically the better choice. But these sentences are still correct.

Here are some more efficient examples of using effect:

Again, effect usually means to an end or event. A great way to distinguish effect from affect is to remember that effect, end, and event all start with “E.”

Effect as a verb

Effect has several other definitions as a noun, but these definitions aren’t the ones that are commonly confused with affect.

The interesting thing, though, is that effect can also be a verb. This is probably the trickiest part of the whole matter.

Because effect means “to cause to exist.”

It’s okay! This isn’t exactly the same meaning as that of the verb affect. Remember, affect means “to alter” or “act upon.” In other words, “to change something,” not to cause or create it.

Read these other examples, and you’ll notice the difference immediately:

Pollution affects the climate, but it doesn’t effect the climate itself. See?

Now, look at this:

This means, as you probably know, that the Boston Tea Party came first. If the tea party had affected the revolution, the revolution would’ve already been underway.

How to use affect and effect correctly

We know you’ve got this. Go forth and use affect and effect confidently!

For some more tricks on how to remember the difference, check out our blog post here.