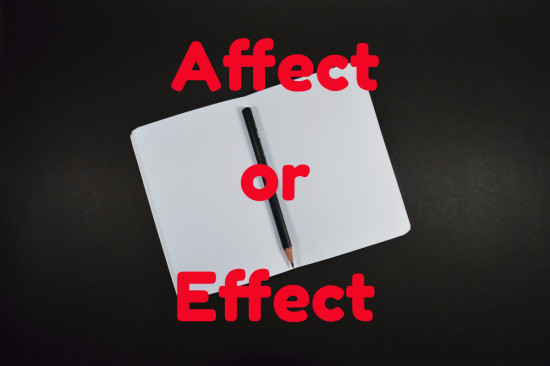 This may not be the most important blog post you’ll ever read in your life, but it can teach you a lesson a lot of other people don’t seem to have grasped, and prevent you from looking unprofessional when writing to or for people who do actually know the difference between effect and affect.

I’m actually quite forgiving about the confusion between these similar-sounding but completely different words. I’m willing to accept perfectly intelligent people are capable of little language vices, but not everyone has my forbearance, and your teachers (and maybe your bosses) are likely to pick up your mistake if you confuse these two words. It just makes you look a bit less intelligent than you really are when you mix them up. So let’s see how you can put your best foot forward by getting it right every time.

Are You Affected by the Law of Cause and Effect?

This little subheading is a dead giveaway and might even be enough to effectively teach this lesson. Here are a few more examples for you:

As we can see, both words refer to the consequence of an action or event, but one, “affect” is always a verb, while “effect” is usually a noun. Sometimes, it can be a verb, but it is seldom used in this way. Take a look at these examples:

In these examples, “effect” is an action that causes a consequence. You can remember the difference between “affect” and “effect” by bearing in mind that to be “affected” by something is the passive result of something else happening, while “effecting” something is an action in itself.

If you find that a bit hard to remember, just use “effect” as a noun. You can test this by putting the word “the” in front of it. If it works, you’re looking at a noun. For instance:

All of these come from our examples, and we can see that they make some kind of sense, but now try putting “the” where “affect” is the correct word.

It doesn’t make sense, does it? That’s because “affect” is never a noun.

Do you need another trick to help you remember which word is a noun and which one is a verb? Try this simple method to jog your memory.

Use any word ending in “aven” to help you remember. I can only think of three:

Choose whichever you prefer. Here’s what it will help you remember:

Since “effect” is so seldom used as a verb, this little trick should see you through 99% of the time. For the 1% of the time that “effect” is a verb, remembering the active role it plays will answer the question.

Another way of remembering it is to remember that “a” comes first in the alphabet. You have to have an action (verb) before you have a reaction, so “a” will be a verb.

A Couple of Other Uses for “Affect”

Just to round things off, we’ll look at other contexts for “affect.” It can mean acting in a way you don’t feel or putting on some kind of a show for the benefit of others.

Fortunately only one of these bucks the system, and then it isn’t working as a noun, but as an adjective. So now you know which of these words is which, and you won’t get caught out again. Go to the top of the class!