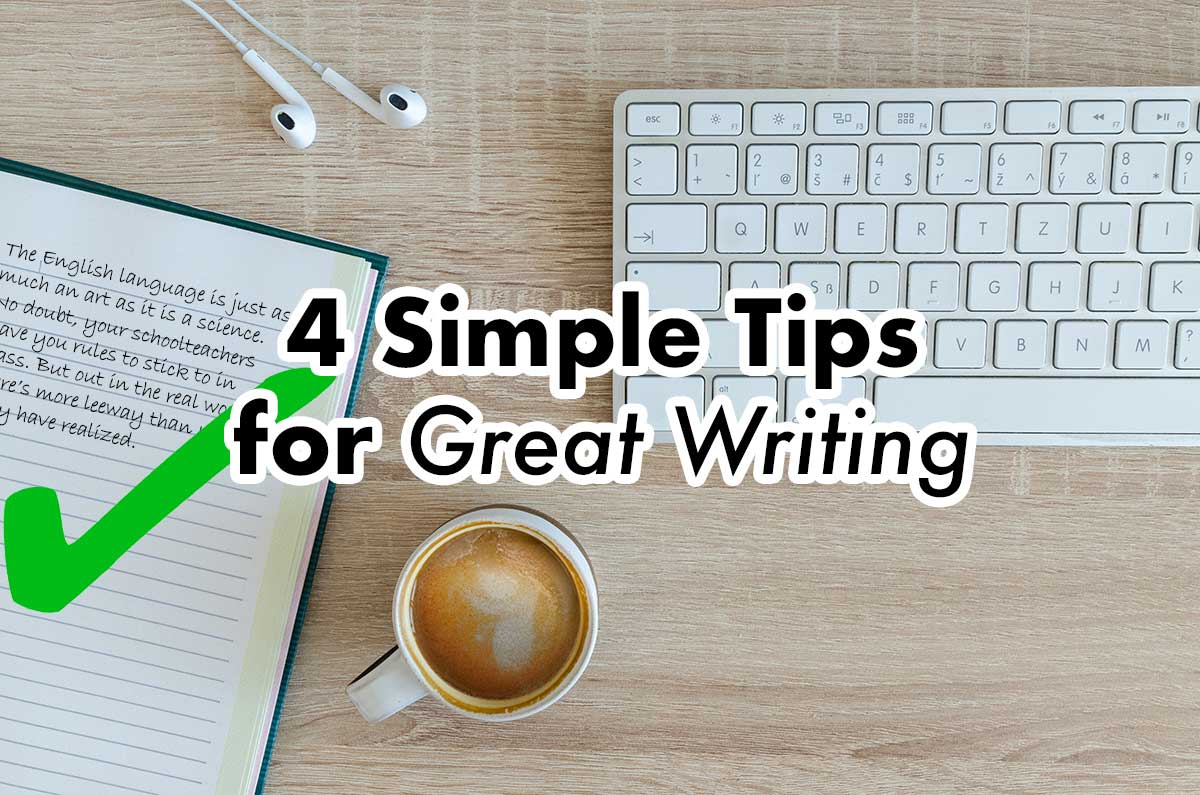 Writing the English language is just as much an art as it is a science. No doubt, your schoolteachers gave you rules to stick to in class. But out in the real world, there’s more leeway than you may have realized.

Not to worry. You don’t need a master’s degree in publishing to be a good writer. If you follow these four tips anytime you write and edit, you’ll be able to turn out a quality email, report, or article.

Some aspects of good writing are rules. Others are style choices. So how can you tell which is which?

The easiest way is to pick and follow a style guide.

There are many style guides for English: AP, APA, CMOS (a.k.a., Chicago), MLA, Oxford … It depends what country you’re writing for and what you’re writing about. If you’re writing within a school or company, you may be asked to follow what’s called a house style guide, that is, a guide created specifically for that entity. Some newspapers like The Economist or The Guardian even stick to their own.

1.1 Which style guide should you pick?

In the best case: the style that your readership considers correct.

Of course, this is not always possible. That’s why it’s important to get into your readers’ heads. For example, if the target audience of your text is teachers or professors, they will prefer the CMOS style to the AP style. For most other people, however, AP is more appropriate. This is true not only for people who write in AP style every day, such as journalists and PR professionals but also for people who don’t care what stylebook you use. Most online articles the average person reads on a daily basis are in AP style. If you stick to that they will most likely consider it “correct.”

What’s more, some rules and guidelines change with the times. For example, until 2019, “African-American” took a hyphen per the AP Stylebook. Today, you’d write it without the hyphen: “African American.”

That’s why it’s important to keep up with style guide updates, which are sometimes issued as often as annually.

Don’t worry too much if learning the details of a certain style sounds complicated. Once you’re familiar with your style guide, many aspects of the English language are unlikely to change. For example, sentences will always end with one of three punctuation marks: a period, an exclamation point, or a question mark.

By getting a solid grasp of grammar rules as well as familiarizing yourself with style choices, you’ll be on the road to rockstar writing in no time.

For a comparison of AP and Chicago, check out our post here.

Last but not least, you might wonder, whether you should use the Oxford comma (also called the serial comma).

You can read more about it here.

2. Use the active voice

In English, sentences typically follow the subject–verb–object pattern: “Emilio caught the ball.” This sentence is written in the active voice, meaning the subject is acting on the object.

However, you could also write, “The ball was caught by Emilio.” This sentence conveys the same idea, but it’s written in the passive voice. The object has become the subject.

Although there are cases in which passive voice can work well or even better than the active voice, most of the time, active voice is usually preferable. Why?

For one thing, the active voice takes more words to say the same thing. If you’re keen to keep your readers’ eyes from tiring or save space, active voice rules.

Additionally, passive voice can sound vague. Take, for example, the following sentence: “The vase was smashed.”

Who exactly smashed the vase? We don’t know. That’s why the passive voice is used in certain instances where the writer wants to eliminate tagging a subject with responsibility. Examples include law and science.

Punctuation marks can make a huge difference in meaning when stringing words together in a sentence. But getting punctuation right can be tricky.

Although you probably learned the basics of punctuation in grade school, there’s more to the marks than what you likely learned. That’s because like most aspects of the English language, punctuation is both art and science.

I found the book he wanted: a dusty, leather-bound dinosaur. (✓)

Javier gave me the news: The zombies had taken over. (✓)

Keep in mind that colons are used differently in American and British English, so again, check your style guide.

Commas indicate pauses between words, phrases, and ideas. There’s an ongoing debate between people who prefer serial, or Oxford, commas and people who don’t. The important thing is to pick an approach and stick to it.

I found the book he wanted—a dusty, leather-bound dinosaur. (✓)

Hyphens are short lines that, among other things, turn two or more words into one idea.

Semicolons are usually used to join two related sentences. But the fashion is to avoid them and simply write two separate sentences.

The English language contains many words that sound like other words but mean something entirely different. These words are called homophones, and even current spellcheckers don’t always know the difference. That’s why you need to be aware of the most commonly confused words.

Here are some commonly confused word pairs. If you dig deeper, you can find many more to watch out for.

Again, by following these four simple tips, you can turn out a quality piece of writing every time.