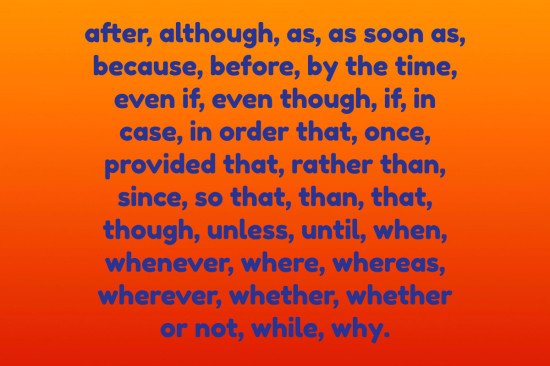 Hey, don’t you want to know what’s going to happen next? Yes, because the idea is incomplete. It depends on the next clause to finish it… ,I will call Mommy for help!

All the underlined words are subordinating conjunctions. Common examples of these include: after, although, as, as soon as, because, before, by the time, even if, even though, if, in case, in order that, once, provided that, rather than, since, so that, than, that, though, unless, until, when, whenever, where, whereas, wherever, whether, whether or not, while, why.

You can see a subordinating conjunction sometimes includes two or three words, so be careful not to think of it as a single word.

The function of this part of speech is to establish a condition. It could be a time, a place, a reason, or something else, but there is some type of condition being given.

Again, it’s important to see these are all unfinished statements. They need the independent clause to form a proper sentence.

Because English varies from one English-speaking country to another, this rule is not followed much in Great Britain. Therefore, the British might consider this to be correct:

The sentence appears to say that “Johnny ate Susie”! So to avoid a misunderstanding (and laughter), it should always be:

Using the comma teaches you better habits and prevents you from writing ambiguous and confusing sentences.

It’s also important to note when a subordinate falls in the middle of a sentence, it normally does not have a comma before it.

Sometimes there’s a natural pause before the subordinating conjunction, so having a comma makes sense.

One other situation where a comma is required occurs with “because” and a negative dependent clause.

Does this sentence mean the same as the following?

The two probably have the same meaning; but what if the speaker really means this?

If this is what he means, the first sentence should stay unchanged. But if he means

Then he should write

This is tricky, but you won’t find this situation very often.