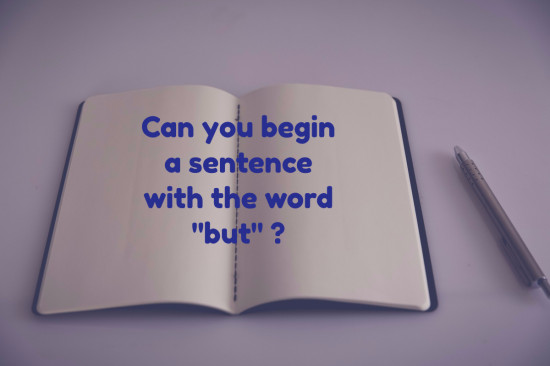 Today, I am here to set you free from one of the shibboleths of grammar. You will be liberated! I certainly was. At school, we were taught you should never, ever, under any circumstances start a sentence with a conjunction. That rules out starting sentences with either “and” or “but” when writing. I faithfully learned the rule. I became positively angry when I read books in which otherwise excellent writers seemed to make this faux pas. How could they be so sloppy?

One day, I decided to settle the matter once and for all. I would find an authoritative reference to back up what I had learned, and I would send it to someone who had just argued you can start a sentence with “but.”

Being Wrong Can Make You Happy

Once I started to check, I quickly realized I was going to be proved wrong. People, including some of the greatest writers of all time, have been starting sentences with “and” and “but” for hundreds of years. Of course, there are style guides that discourage it, but it’s perfectly acceptable to begin a sentence with “but” when writing. I was thrilled! That very day, I started peppering my writing with sentences starting with conjunctions. But one shouldn’t go overboard! See what I did there? Hah!

Using any stylistic quirk too frequently spoils your writing. By all means, start sentences with “but” from time to time, but remember that “but” also belongs after a comma. I did it again, didn’t I?

When Should You Consider Starting a Sentence With “But”?

“Contrary to what your high school English teacher told you, there’s no reason not to begin a sentence with but or and; in fact, these words often make a sentence more forceful and graceful. They are almost always better than beginning with however or additionally.” (Professor Jack Lynch, Associate Professor of English, Rutgers University, New Jersey)

Thank you, professor! I’ll admit to using “however,” but being lazy, I really do prefer the word “but” to begin a sentence when given a choice. “Additionally” is just awful, and I flinch every time I start a sentence with it. It seems so pompous!

The professor also confirms starting with the conjunction can make your writing more forceful. Remember, you don’t always want to be forceful. Sometimes sentence flow is more appropriate. But a choppy “but” at the start of a sentence certainly does seem to add emphasis when that’s what you’re looking for.

People Are Going to Argue This With You

Just as I once was a firm believer in the “never start a sentence with and or but” non-rule, you’ll come across enslaved souls who have been taught the very same non-rule. Where can they turn for confirmation and comfort? The Bible is always a good place. Refer them to Genesis Chapter 1 for sentences starting with “and.”

For a sentence starting with “but,” you may have to read a little further – all the way to Genesis 8:1: “But God remembered Noah and all the wild animals and the livestock that were with him in the ark, and he sent a wind over the earth, and the waters receded.”

Looking around online, I see some arguing that using the Bible as a work of English literature is pushing the envelope. I beg to differ, but perhaps as the world’s greatest bestseller, it’s a bit too commercial for them. Let’s take them to the real authority: the notoriously stuffy and pedantic, Fowler’s Modern English Usage. It’s seen as the authoritative book on English Grammar, and if they won’t believe it, they’re never going to believe anyone.

If they’re trying to find a comeback, you can always help them out. But they won’t be impressed with the reference you give them because I’m ready to bet you anything they’ve never have heard of Quackenbos!

“A sentence should not commence with the conjunctions and, for, but, or however…. ” (George Payn Quackenbos, An Advanced Course of Composition and Rhetoric, 1854)

Let’s sum up that argument, ladies and gentlemen of the jury. We have the Bible, a host of brilliant writers, and Fowler’s Modern English Usage vs… Quackenbos. I’ll see your Quackenbos and I’ll raise you an Albert Einstein. Oops, we’ve gone from law to poker. Please pardon the mixed metaphors. Of course, Shakespeare also occasionally mixed metaphors, but we’ll go into that another time, shall we?

Why Were Students Taught This Non-Rule Rule?

Why were we taught this non-rule rule about not starting sentences with conjunctions? Several authorities seem to think it was done to prevent school kids from writing as they often talk:

“I went to my friend’s house yesterday. And we decided to go to the mall. And while we were there we saw a whole bunch of our friends. And they were just hanging out like we were. And because we didn’t have any money that was all we could do, really.”

“But then John said he’d had a birthday, and we could all go for ice creams. But when we got to the ice-cream parlor, he found that he had left his wallet at home. But that didn’t stop us from having a good time together while teasing John that he owed us an ice-cream.”

You have to admit, that’s a bit much. So to close, we quote Oscar Wilde, “Everything in moderation, including moderation.”