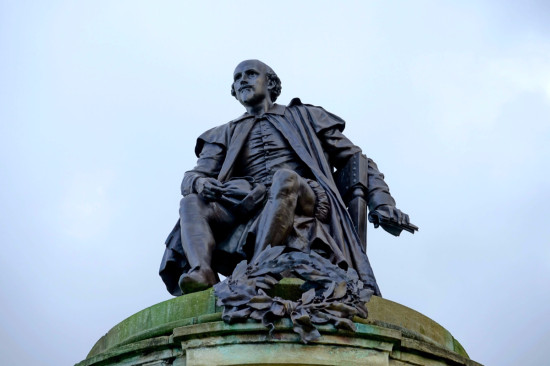 Shakespeare, he’s terribly highbrow isn’t he? And besides, it’s all in archaic English that we just don’t use any more. If we were to go around quoting Shakespeare, people would think us pretentious – or would they?

The truth is that Shakespeare was the HBO of the times. He wrote entertaining plays for the masses and played on themes such as sex, murder, mystery, magic and politics. His work was the 17th century equivalent of “Game of Thrones,” except that the girls weren’t as gorgeous because the morals of the times forbade women from treading the boards as thespians. Yes, “thespians.” Look it up if you must!

I can just hear people discussing the latest play,

“Didst thou see the latest play by Shakespeare?”

“Yes, but it was the same old thing: sex and violence followed by more sex and violence. What, I ask thee, are we to make of the shocking entertainments of modern times, prithee?”

“Methinks it should have an age restriction!”

The popularity of Shakespeare through the centuries caused people to quote him, and today, we spout quotes and idioms from his plays without even realizing their origins. If you ever say any of the following, you’re quoting the bard. Even if you don’t personally use these words, there’s a good chance you know exactly what the mean because they are used so often to this day.

Dead as a Doornail

“Look on me well: I have eat no meat these five days; yet, come thou and thy five men, and if I do not leave you all as dead as a doornail, I pray God I may never eat grass more.” (Henry VI part 2)

That was written in 1592, but the bard was hardly being original. The saying had been around since 1350, if not earlier. Would it have stayed alive without Shakespeare? Probably not!

Method in the Madness

“Though this be madness, yet there is method in it…” (Hamlet)

And by the way, if you use the word “gunk” please give a nod to Shakespeare, who, in the same act, had Hamlet speaking of “eyes full of gunk.”

Out of the Jaws of Death

Unlike “dead as a doornail,” it seems this is completely original. There are no written references to this phrase before Twelfth Night (1602). It certainly caught on, and to this day, we refer to the “jaws of death.” It’s certainly an exciting story, complete with cops, pirates, bigwigs, and cases of mistaken identity. But I won’t spoil it for you…

We Have Seen Better Days

Did I mention Shakespeare also wrote comedies? “As You Like It” was a complete side-splitter back in 1599, and everyone was probably quoting bits of it and giggling like crazy just as we quote our favorite comedians today. Nowadays, saying you’ve seen better days isn’t even thought of as funny. Maybe the joke got stale or we lost the context.

“Nay, if our wits run the wild-goose chase, I am done, for thou hast more of the wild-goose in one of thy wits than, I am sure, I have in my whole five. Was I with you there for the goose?”

This quote comes from “Romeo and Juliet,” and it probably referred to a horse race of some kind, though how geese got involved in a horse race is beyond me.

I don’t have to give you the quote in context because that’s all it consisted of. It comes from the play ‘Trolius and Cressida,” and it has been taken up by bands such as Green Day. We use it with reference to unpleasant people of any description as soon as they offer to go away and leave us alone.

“Yes, for a score of kingdoms you should wrangle, and I would call it fair play.” (The Tempest)

Of course, we use this phrase in sport and gambling far more often than we use it in politics these days. Could it be that politics isn’t even expected to play fair? Let’s not even go there. I’m sure it never was.

You know how it is: sometimes lying low is the best solution, and that’s just what Antonio in the play “Much Ado About Nothing” thought.

“If he could right himself with quarreling, some of us would lie low.”

It Was Greek to Me…

Have you ever said this after a particularly baffling lecture at school? In the play “Julius Caesar,” Casca was equally baffled:

“Nay, an I tell you that, Ill ne’er look you i’ the face again: but those that understood him smiled at one another and shook their heads; but, for mine own part, it was Greek to me.”

I Must Be Cruel to Be Kind

Again, we quote from Shakespeare, and this time, it’s Hamlet:

“So, again, good night. I must be cruel only to be kind. Thus bad begins and worse remains behind.”

I bet you didn’t even know that was an erudite quote. Mind you, as I pointed out before, Shakespeare was considered a bit racy, so you don’t have to feel like too much of a nerd if you quote him habitually.

Apart from popular phrases such as “Be-all and end-all” (Macbeth), “Break the ice” (Taming of the Shrew), “Heart of Gold” (Henry V), “Kill with Kindness” (Taming of the Shrew) and even “Knock, knock. Who’s there?” (Macbeth), we also have Shakespeare to thank for the continued use of certain popular words. “Puke” is just one of them. Who said Shakespeare was highbrow?

The Merchant of Venice

The Merry Wives of Windsor

Much Ado About Nothing

The Taming of the Shrew