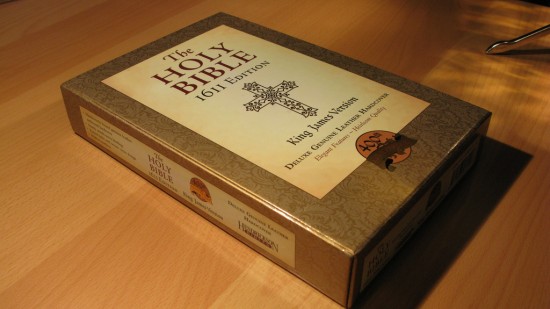 When it comes to calculating the number of words in the Bible, it’s not as straightforward as it might first appear. The problem is there are hundreds of different translations of the Bible, and each one has a different number of words, so the answer depends on which bible you’re actually referring to. That being said, if you are looking for a general answer, it’s probably best to use one of the most common versions, such as the King James Bible.

How many words are there in the Bible?

The King James Authorized Bible has 783,137 words. How many words is that? If you can type at 60 words a minute, it would take you just over 217 and a half hours to retype the entire Bible. Can you imagine how long type-setting must have taken in the early days of printing?

As for the number of letter characters in the Bible, the total count is a staggering 3,116,480. Small wonder that in the days of movable type a lot of printing errors were made. In the notorious “Wicked Bible'” the word “not” was accidentally omitted from the commandment “Thou shalt not commit adultery.” Three little letters can make a huge difference in meaning.

While 783,137 words and 3,116,480 may seem to be a lot, there are others with even more. The Catholic Bible has an even higher word count because it has seven books more than the protestant Bible. Are you wondering why?

Martin Luther felt that seven of the books accepted as part of the Old Testament at the time were not quite up to scratch since the 90 AD Jewish Council of Jamnia had rejected them. Luther reasoned that the Old Testament was Jewish, and, therefore, shouldn’t include anything that Jews didn’t accept.

Chapters and verses: finding your way around

There are 66 books in the Bible, and before the 12th century, they weren’t divided into chapters. This innovation was brought about by a man named Stephen Langton, and it made finding your way around a lot easier. All in all, the Bible has 1,189 chapters, but it was still quite difficult to get “on the same page” when studying the Bible. So in 1551, Robert Estienne came up with the idea of numbering verses. There are 31,102 of them, and the shortest one is John 11:35 “Jesus wept,” while the longest is in the book of Esther and consists of 78 words.

What’s in a name?

A lot of the names we give to children have biblical origins. How many people named “Mark” or “John” do you know? Now think of all the “Marys” you’ve met in your time. Of course, some names have fallen out of grace for good reasons. Being called “Judas” would be a bad start in life for any boy. “Mahershalalhashbaz” is the longest name in the Bible, and fortunately for us, it has fallen out of fashion.

Some more wordy facts for fun

There are, of course, only 10 commandments which Jesus neatly summed up into two really comprehensive ones, but if you count commands instead of commandments, you’d come up with a total of 6,468. Is anyone in the mood for checking this fact? There are even more predictions – 8,000 of them – and a sum total of 1,260 promises.

Questions are certainly asked. If you were to flip through your Bible counting question marks, you’d find 3,294, but now that I’ve told you how many there are, you can save yourself the trouble.

Looking for the longest book in the Bible? Look no further than Psalms, a book that also includes the longest chapter in the Bible: Psalm 119, which has more words than any other chapter. For those who are looking for a lot of information in a very short book, 3 John is recommended reading; it has the lowest word count of all the books in the Bible.

So who wrote all this in the first place?

How many copies of the Bible have been printed?

Would you like to guess which country prints the most bibles? China comes in at number 1. There’s only one publishing house that’s allowed to print them, and in 2012, its 100 millionth Bible rolled off the presses.

No other book in history has been as influential as the Bible. From its fascinating history to the debates around biblical matters that rage today. Whatever your opinions, one thing is absolutely certain: the King James Authorized Bible has 783,137 words.