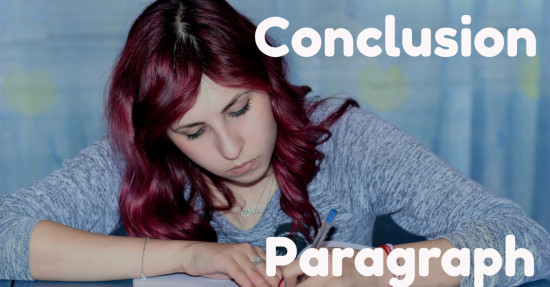 When you’re writing an academic essay, or any written report for that matter, you may be tempted to wrap things up as quickly as possible. You may even be tempted to just leave your reader hanging as soon as you’ve presented all the facts and arguments. If you do that, you leave your reader in a “Yes, so what?” position which is clearly not the intention of any piece of persuasive writing.

Your conclusion paragraph joins the dots between your introduction and all the facts you’ve just presented, showing your reader the “take home” message you’re trying to get across. How should you write it to achieve this goal?

I Already Wrote It!

You may argue, “I already told everyone what I concluded in my thesis statement!” That’s true, but at the time, you hadn’t presented the evidence. Now you have to show how the evidence relates to the thesis. Don’t just think it’s obvious and walk away. Your reader does not live inside your head. What is obvious to you may not be as obvious to everyone else!

However, your thesis statement does form the basis of at least part of your conclusion. You can restate it in different words, but now you will flesh it out by relating it to all the information you’ve discussed.

What Sub-Points Did You Make?

To support your thesis, you’ll have discussed several sub-points. What were they? Look at the sub-topics you discussed and determine how they contribute to the thesis. If they don’t contribute at all, or you can’t see the link, they shouldn’t be in the essay! Finally, you want to leave your reader with some food for thought, so your concluding paragraph needs to be good.

Did you know some people (including your teachers) will read your introduction, skip to your conclusion, and only then look at your body text? It’s a good way of seeing how a student has approached the information, so never think your conclusion is unimportant just because it’s at the end.

Let’s Look at an Example

In a recent post, we discussed how to prepare a thesis statement. We came up with this one:

“The United States entered the First World War because of German attacks on US shipping and to halt Germany’s rapid expansion and growing military power which presented a direct threat to US interests and territorial integrity.”

Let’s assume that in our essay, we discussed the practical reasons why the US entered the First World War. We also looked at the moral reasons, and theorized these were highlighted by president Woodrow Wilson to gain extra support for the war effort. They may have been real enough, but we argue they were secondary to the provocation and threats we mentioned in our thesis. Now we have to tie up all the points.

“Although president Woodrow Wilson highlighted the moral reasons why the US entered the war, these had always existed, and had only seen widespread support from certain sectors of the community. With German submarines attacking and sinking US commercial shipping, and even passenger liners such as the Lusitania, the need to enter the war became more urgent. The Zimmerman telegram, which offered support to Mexico should it embark on a war with the US confirmed that Germany did not respect US neutrality, and indeed posed a direct threat to US territorial integrity. Although there were other factors that contributed to the decision, it was these two issues that finally tipped the balance. The US entry into the ‘War to end all Wars,’ was a defensive move, and pragmatism outweighed morality in the final decision to enter it.”

Nothing New in the Conclusion, but Food for Thought

Our example is a little incomplete because I haven’t given you the body text, but you should assume the essay discussed all the reasons for entering the war in detail. Each subsection of the essay may have had a mini-conclusion of its own showing why the information was included and how I think it contributes to the argument presented in my thesis.

My concluding paragraph sums everything up and shows how the information leads up to a final thought, in this case, “pragmatism outweighed morality.”

As a semi-final check, I will consult my question. This may have been:

Or it could have been:

The last check is done to see if all the information I have included in the essay contributes to the conclusion. There should be a mention, however brief, of all the aspects that were discussed in the body text. You have compiled a lot of information, and it’s up to you to draw it all together into a powerful conclusion supported by the facts you presented.