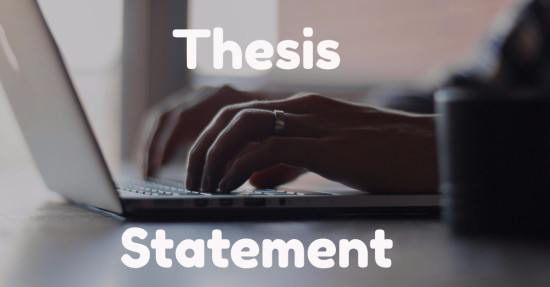 When you write a paper or essay, you must have a thesis statement. What is it? It’s a statement of your position or point of view. You’ll use much of your essay backing this position up with supporting information, looking at counter-arguments, and generally explaining why you took this point of view. Remember, no thesis statement can be wrong as long as you have the evidence to back it up.

Do Your Research First

Choosing a stance can seem intimidating. How should you go about it? The trick is to do your research first. Don’t just choose a point of view and then try to manipulate the facts to fit it. Instead, look at the facts and see what you can conclude from them. You can then sum your findings up into one strong sentence that will tell your reader how you plan to approach the topic under discussion.

Where Do You Make Your Thesis Statement?

Usually, you’ll write a paragraph introducing your topic, ending your paragraph with your thesis statement. For example, if your essay is about the reasons the US entered the First World War, you might begin with a few sentences outlining the pivotal role the US’s entry in the war had and why it was so important. You might begin by explaining why the US was not eager to enter the war to begin with, and then you’ll end your opening paragraph with your thesis statement.

Be Sure Your Thesis Answers the Question

A thesis statement should be a concise sentence that shows how you’ll answer the question you have been given. As a result, your statement has to be a strong one rather than a vague one. For example:

“The United States entered the first world war for several reasons, some of which matched those of its allies, while others didn’t,” is a weak thesis. It doesn’t give any specifics, and it doesn’t explain what your essay is about other than saying it’s about the US entry into the First World War, which was presumably the question you are supposed to be answering.

If your thesis statement doesn’t answer the question you were given, you have gone off on a tangent, and you’ll receive poor marks for your essay. Test it by reading your question again followed by your thesis.

A Strong Thesis Statement Clarifies the Facts or Your Views

Sometimes, you’ll be asked to present facts, and at others, you may be asked to give a personal opinion. Either way, you absolutely must understand the subject matter before formulating your thesis. Once you know what you’re talking about, you can create a thesis statement that’s free of vagueness or ambiguity.

“The United States entered the First World War because of German provocation and for internal security reasons,” is somewhat better than our first example, but it’s still a little weak.

“The United States entered the First World War because of German attacks on US shipping and to halt Germany’s rapid expansion and growing military power which presented a direct threat to US interests and territorial integrity,” is a clear and unambiguous statement.

The former reason is the primary deciding factor, but American politicians also feared Germany’s expansionist policies. The Zimmerman telegram, an intercepted message from Germany offering support for Mexico if it went to war against the US, confirmed that being on a different continent didn’t make the US safe from German ambition. As you can see, our thesis sums these two primary contributing factors up quite neatly, and the rest of the essay can explore these two points in greater detail.

Your thesis statement should fulfill the following requirements:

You may not be directly asked to formulate a thesis statement, but in general, you can take it as being an element that is expected.

As you analyze the information you have at your disposal, you may decide to change or expand on your thesis statement. That’s fine. Your first, second, or even third attempts may not be as comprehensive as you first thought. As one of the most important sentences in your paper, your thesis statement is worth reworking to make it as strong as you possibly can.

When in doubt, remember that your teachers are there to help. If they feel that answering your question would be unfair to other students, they will say so. It never hurts to ask if they feel your statement is strong enough.