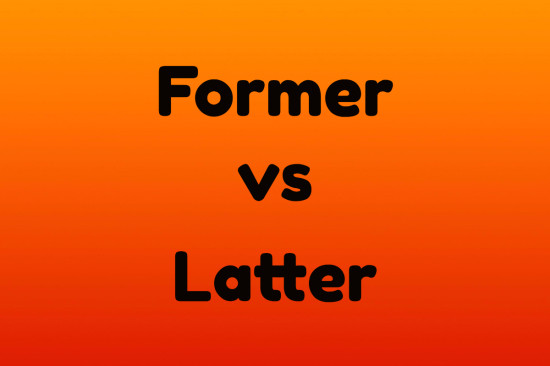 Here’s a nice easy one to remember the difference between the words former and latter. Do you see the “for” in “former”? Use it to tell you the thing you’re talking about came before another thing that you mentioned.

Do you see the “latte” in “latter”? That means you should have a cup of coffee! OK. Kidding, but it sounds a lot like “later” doesn’t it? That tells you that the thing you’re referring to came later than, or after something else.

Former and Latter in Action

Let’s make these words jump through some hoops!

“It was raining, and there was lightening in the air. Mary didn’t mind the former problem, but the latter one troubled her because she was afraid of thunder.”

“You need to have a lot of determination to get through college, and you have to be ready to do a lot of hard work. If I were to rate these two, I’d say the latter point is the most important to your success.”

“If I had to choose between good looks and intelligence, I think I’d go for the former advantage!” (Silly you!)

“I love John Keats and William Shakespeare, but the latter seems to have more applicability to today’s word.”

Sometimes, more than two things will be mentioned, with “latter” used to denote what is last. Using “former” in this context may be confusing because it doesn’t really tell you which of the items that came first you’re referring to.

“There were apples, pears, oranges and grapes on the table, but it was the latter that made Joan’s mouth water!”

Should You Use Former and Latter?

To tell you the truth, using words like “former” or “latter” can make your reader go back to reread the first part of a sentence, and that isn’t a great strategy. It’s cumbersome! And even if you change things around and warn people to look out for the former or latter point before stating them, it sounds a little pompous. Even in business writing, coming across as a person who is easy to understand and communicate with is an advantage.

So you could start by warning people to look out for the first or second thing you say, but there are easier and more comfortable ways to do it. For instance:

“Which of these options do you prefer, the former, or the latter?”

“Choose one of these two options.”

“Which of these two options would you prefer, the first or the second?”

There’s nothing actually wrong with using “former” and “latter,” but to be honest with you, I never do. It’s rather archaic, even though the two words are still in use, and there just seem to be easier ways to say things. I mean, when’s the last time you use either of these words in a conversation with a friend? I thought so!

Words to read and understand, and probably not to use.

There are a lot of words out there that are important for you to understand, but that you may never use in your own writing. Maybe it’s just me, but using these words sounds like it was written in the 19th century.

“Mary and Joan entered the room, with the latter nervously clutching her handbag.”

The following seems to flow so much better:

“Mary and Joan entered the room; Joan was nervously clutching her handbag.”

But when your teacher makes a note saying you should discuss the latter point in greater detail, it’s helpful knowing which one he or she meant!

What Do You Think?