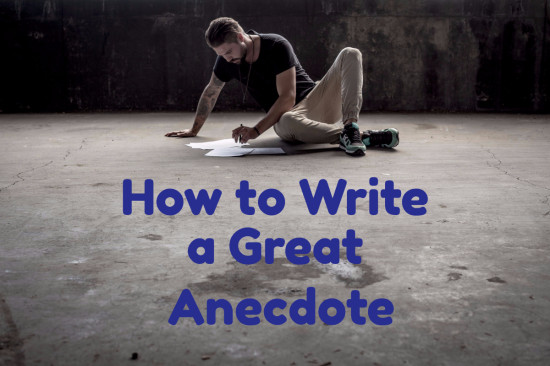 Before we start talking about how to write an anecdote, you may be wondering, “What is an anecdote?” Basically, it’s a short story about something that happened to you, someone you know, or know of. If you and your friends are chatting about a person, and you remember something they did, then tell the story as part of the conversation, you have used an anecdote.

Anecdotes are used to give a personal perspective, illustrate a point, make people think about something, or make them laugh. One of the places where you might find anecdote writing useful is when writing a college application essay. Perhaps something that happened in your life inspired you to study in a certain direction, and you’d like to share the story to show why you are highly motivated to do well.

Non-fiction, informal essays can also be livened up with anecdotes that show how the information you’re sharing works in practice, and why people need to know about or think about the topic. For example, when I write about gender discrimination in the workplace, I always remember to point out that women can also be guilty of this.

A female boss I worked under years ago didn’t like hiring young women, “They’re just going to get married and move away or have babies, and then we have to give them maternity leave,” she would say. This illustrates that women are sometimes also guilty of gender discrimination.

You can also use anecdotes to amuse or entertain. Not all anecdotes are serious! If something really funny happens to you today, you’ll tell your friends, won’t you? That’s an anecdote! Here’s one of my favorites:

My brother used to have an absolute obsession with answering the phone in time. He would get quite agitated if it stopped ringing before anyone picked up. One day, the phone started ringing while he was in the bathroom. He called out in a panicky voice, “Ring the phone! It’s answering!” The phone didn’t get answered. I was laughing much too hard for that!

How to Write an Anecdote

First, be sure the anecdote you have in mind is relevant to the context. If you are writing about dogs, for example, an anecdote about a cat is irrelevant. Ask yourself, “Why do I want to use this anecdote? What point does it illustrate?”

Next, consider these questions:

Because an anecdote is a mini-story, you structure it in the same way that you would structure a longer piece. You introduce the story, you say what happened, and you either draw a conclusion or ask a question so your reader can reach his or her own conclusion.

The main point you’re trying to get across is your “punchline” (whether it’s funny or serious), so save it for last. The first thing to mention is the person or group of people directly involved in the story. In my anecdote about a sexist female boss, I introduce her, but not the other people on the recruitment panel. They are not relevant to the story itself, so we leave them out.

We also don’t bother to mention the weather, the color of the boardroom furniture, and so on. These facts don’t contribute to the story. If they did, we could add them. Always remember you’re illustrating a point, and anything that doesn’t form part of that point will be a distraction.

Once you have introduced your players and have provided any necessary context to set the stage, you can move on to explaining what happened. Begin at the beginning and write the events chronologically. It’s possible to tell your anecdote differently, but this is the easiest way to keep it coherent and easy to understand. Lastly, state your conclusion, or ask your readers to draw their own conclusion.

The Differences Between Anecdotes and Stories

Anecdotes are short. At most, they will consist of a paragraph, or maybe two paragraphs. Stories are longer. When we write stories, we can include a lot more detail, and we will spend more effort on drawing the reader into the scene so that they feel part of it.

Can an Anecdote Be a Single Sentence? Yes, It Can

Admittedly, these aren’t great anecdotes, but they are anecdotes nonetheless.

How to Write a Great Anecdote

Does anyone out there have an anecdote about anecdotes? Do tell!