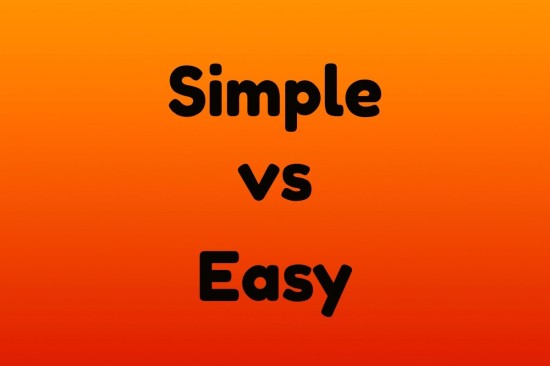 Is it simple, or is it easy? Let’s put it this way, there are a lot of things that are simple, but aren’t in the least bit easy, and there are other differences too. Let’s start with that first one. You want to write a book. It’s simple, isn’t it? All you need to do is sit down in front of the computer and type. But is that easy?

The day you decide to begin writing, your kids decide to invite all their friends over resulting in a houseful of chaos. The six hours of quiet time you planned for writing never materializes. On the second day, you set aside the time but also come down with a case of writer’s block. The knowledge of what you need to do is simple to understand, but actually doing it isn’t as easy as you imagined.

You decide you’d like to become a rock star. It’s simple. All you have to do is learn to play guitar really well, write a good song, and capture the attention of a powerful person in the music business. Is it easy? Probably not. Learning to play the guitar will take years of practice, you’ve got a tin ear, and as for the song and the high-powered producer, even once you learn to play, neither of those goals is easy.

You want to live forever. It’s simple! All you have to do is avoid dying. Oh dear! That’s impossible! Douglas Adams said that flying is as simple as falling and not hitting the ground. How I wish it was easy to do that! Despite numerous attempts, I still haven’t gotten it right.

Living the Simple Life vs Living an Easy Life

Easy living and simple living are two different things. Living a simple life means having few material things, doing things the natural way, and avoiding complications like debts. Easy living, on the other hand, is usually associated with having all the luxuries that money can buy! What’s more, the simple life is hard work, but the easy life means avoiding hard work at all costs.

Being Simple and Being Easy

Saying that someone is a bit simple means that they’re actually a little stupid. As for saying someone is easy, there are various interpretations, one of them being that they’re laid-back and relaxed, while the other is far less complimentary, but as you can see, being easy is definitely not the same thing as being simple.

Let’s get serious now. I went and hunted through online dictionaries to get all the possible meanings of these two words. I must say, a lot of the dictionary entries were disappointing because they didn’t have all the possible definitions. I soon found that simply getting a complete dictionary entry, while it should be simple, isn’t easy. Then I had an “Aha” moment and hit the Oxford English Dictionary. What an easy solution – and it was simple too!

Something that is basic or fundamental is also simple. “It’s a simple truth: falling and missing the ground is impossible.”

“Simple” can also be used to show that something isn’t complicated or fancy. “She wore a simple black dress.”

In scholarly language, it could mean that a thing isn’t in a compound form. That applies to math, botany, and English grammar.

As we’ve seen, it could mean that someone is a bit dumb.

And historically, a simple was a medicinal herb.

An easy thing is one that is not difficult to do. “It was easy to walk up the hill.”

An easy life is laid back and free of worry. “I want the easy life of someone who inherited a million dollars.”

It could mean that someone is free of awkwardness: “He won them over with his easy charm,” or “Her easy manner made her popular.”

Unfortunately, it can also mean that someone or something is vulnerable. “Women who walk alone at night are easy targets for criminals.”

It can even be an insult. “She has a reputation for being easy.”

Lastly, you can use “easy” as an exclamation: “Easy, Butch! Don’t bark so excitedly!”

Similar, but Not Quite the Same