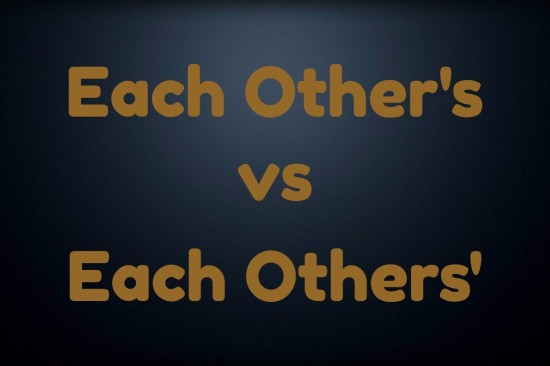 Due to the fact these two-word combinations sound exactly the same with only the placement of the apostrophe being different, many people aren’t sure which of them is correct. The aim of this article is to de-fog the fogginess surrounding these two (we’ve already done so with was vs were, further away vs farther away, and onto vs on to). One of these forms is correct, and the other is just plain wrong. Would anyone care to lay bets before we continue by explaining which is which?

“Each” Refers to How Many?

To get the answer we’re looking for, we should begin by looking at the word “each.” It automatically implies that we are talking about one of the following: a single object or person, a group of things, or people that can be regarded as a unit.

You could talk about “each people,” but then you would be talking about individual races, which turns the word “people” into a singular that could be pluralized as “peoples.” For example: “Each people has its own culture,” means that the French culture differs from the German culture, and so on. It would be a slightly odd way of expressing the idea, but it wouldn’t be wrong because in the example “people” is singular.

The bottom line with all of this? As soon as you see the word “each,” the word following it needs to be in its singular form.

“Other” Refers to How Many?

Because we have prefixed “other” with “each” it has to remain in the singular form. While there is a plural form for “other” which is “others,” it differs from the example of “people” since it has no alternative meaning and cannot be pluralized yet again.

Returning to that example, we could say that “people” means a whole lot of persons, or we could use it to indicate race: “The Turks are a people who love their coffee. The Turks and the Greeks are two peoples who have often been at war.” There is no such alternative meaning for “others.” It’s the plural form of “other” and that’s all there is to it.

Sticking to the Rule

The rule is that “each” will always be followed by a singular. “John and Mary promised to love each other forever. They agreed to take care of each other’s wellbeing above all else.” The apostrophe is used to indicate possession, and it comes before the s, not after it.

“One another” is really just another way of saying “Each other.” But if we leave out the word that indicates a singular (“one” or “each”), we can use the apostrophe after the s because we are now talking about multiple others simultaneously.

No Need for Confusion

Just remember the simple rule about the word following “each” and you’ll never get “each other’s” wrong again. Now, to the important business at hand. Who lost the bet I invited you to make at the beginning of this piece? I accept PayPal, wire transfers, and indentured servitude as methods of payment…