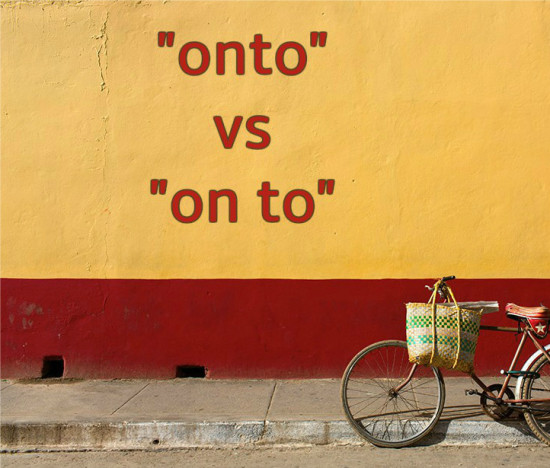 There are a number of words which can be confusing to those using English. Some examples include was vs were, who vs whom, and further vs farther. Another of those is ‘onto’ and ‘on to’. They look so similar, and yet they are so different. When you’re talking, nobody’s going to be looking for a space between ‘on’ and ‘to’, but when you’re writing, that little space can make the difference between correct work and an embarrassing mistake.

There’s actually quite a big difference between ‘on to’ and ‘onto’, but there’s also a really simple way to know which one of these options you should be using at any given time. We’ll first look at the reasons, and then we’ll check out the ‘cheat’ that will solve your dilemma without too much grammatical analysis. The big difference explained

When to use ‘onto’

‘Onto’ could, in many instances, be replaced with the less commonly used ‘upon’. It simply means that something landed on, was placed on top of or ended up on something else. Although you might be pardoned for thinking it to be an adverb, it’s actually a preposition. For example:

In informal language, ‘onto’ is also used to show that you’re ‘on top of’ a situation, or well-informed:

In this instance ‘on’ is part of a phrase containing a verb and acts as an adverb, while ‘to’ is a preposition linked to an object. For example:

‘On’ is associated with the verbs ‘held’, ‘log’ and ‘move’ in these examples, while ‘to’ links us to the object of the sentence – the steering wheel, the website or the exhibit.

To save yourself from the tricky business of sentence analysis every time you have to decide whether or not you’ll use ‘on to’ or ‘onto’, try this cheat. In most cases, it will clarify which of the two you should use.

Try taking the word ‘up’ and see how it fits into the sentence if you use it before ‘on’. If it’s a good fit, ‘onto’ is likely to be the correct word choice. So, using the first of each of our sets of examples:

As we can see, ‘up fits well into the first example, but doesn’t make any sense in the second. This ‘cheat’ works nine times out of ten, but there may still be times when choosing between ‘on’ and ‘onto’ can be confusing. For instance:

In the second example, the group of people ended up on the football field itself. This could be compared with the frog jumping (up) onto a stone. So when all else fails, analysing the meaning you are trying to convey may help you with your dilemma.

As insignificant as the difference between ‘onto’ and ‘on to’ may seem, there are specific instances in which one or the other will be the correct choice. Working out which of the two is correct can be achieved by analysing the sentence, by checking on meaning, or by trying the word ‘up’ before on as a cheat. If the sentence still makes sense with ‘up’ inserted, then ‘onto’ is correct.