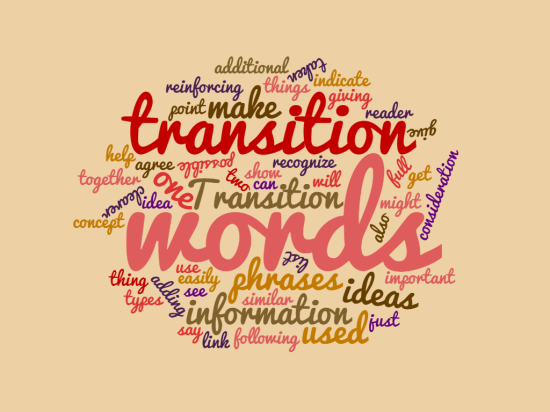 Transition words are words or phrases used to link ideas together. They help your reader to see more than one point is important and both should be taken into consideration. They also indicate different ideas in the same paragraph or sentence are related.

Let’s get into the different types of transition words to make the concept clearer. This won’t give you the full list of transition words, but will make it possible to easily recognize them. These words can be used to show two things agree with each other, are similar to each other, or you’re giving additional information.

When you are adding information or reinforcing an idea you might use one of the following transition words:

Some of these are also short, basic words such as:

Transition words can be used to point out a contradiction, a limitation or an opposing point of view:

When you are trying to link cause and effect, write about something that is conditional or express an intention, you may also use transitional words:

Another time you’d use these words is when you want to give an example, support a point or emphasize it:

We also use transitional words to show that something has a consequence or result:

We use them to make conclusions too:

…and to define a time period

It’s important to note that none of these words and phrases are actually wrong, I’m inclined to think that using simple, straightforward language is best. This means that you often don’t need to use many of the transition words listed above.

For example, I’m guilty of using “in addition,” but I could just as easily say “also” or even “and.” As for “albeit” and “notwithstanding,” I’m inclined to think that “but” and “nevertheless” are every bit as good and much more accessible to a reader. “For the purpose of” is also one I’ll admit to using, but it can easily be reduced to three letters. I prefer “for” and it will do the job just as well most of the time. As for “At the present time,” the word “now” is really all we need. “In the event of” is similar. It can be replaced with the two letter word “if.”

You’ll usually only use the wordier of these transition phrases in academic writing, and they can be helpful. After all, although your choice of transition words may not necessarily impress your teacher, you can use the longer phrases to stretch your word count. Remember, every time you write “in the event of” instead of “if” that’s three words towards your target word count instead of one. “For the purpose of” could just be “for,” but then you only get one word instead of four. Transition words are handy, and everyone uses them a lot, but be careful about using excessively wordy ones unnecessarily.