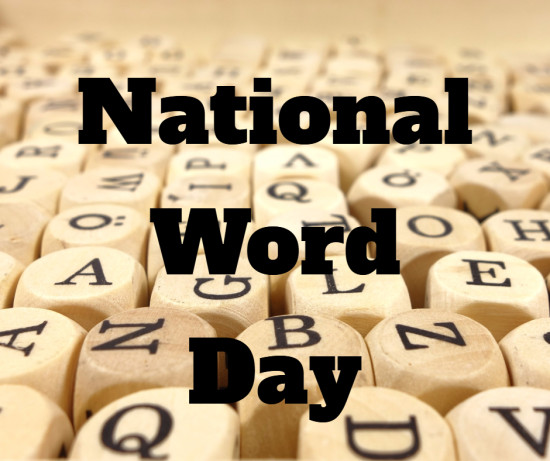 There seems to be a day for just about everything. I wouldn’t be in the least bit surprised if I came across National Let’s Eat Takeout Day, and I’d probably support it if it existed. Earth Day is real enough, but why only one day? Shouldn’t we make every day Earth Day? Maybe we wouldn’t want to turn off the lights for an hour every night, but perhaps we could turn off the TV, or do something else that’s good for the environment.

Now we have National Word Day. Have you never heard about it? Here’s what you need to know!

Have you ever noticed we don’t use a lot of the words in our vocabulary? By the time you reach the age of four, you already know 10,000 words. Once you reach adulthood, you’ll probably know 20,000 to 35,000 different words, and you’ll keep learning new ones until you reach middle age (and possibly even later if you have a curious mind and like to read).

How many of the words you know do you use in everyday speech? I couldn’t find an answer to this question, but I’m ready to guess we probably use the same 10,000 we knew when we were little, if we even use that many.

There are currently 171,476 words in the English language, with more being added every day. I know because I counted them especially for you. Alright, I didn’t. I looked that up.

According to the same source, a further 47,156 words have become obsolete or archaic. What happened to them? People stopped using them so they became extinct. When we stop using words, they just die out of the language, and you have to admit that the mass-extinction of words is rather a sad thing.

That’s why we have National Word Day. It’s a words-conservation drive!

What Should You Do on National Word Day?

We are encouraged to give seldom-used words an airing in the hope that others will pick them up and use them too. National Word Day is a celebration of language. We are encouraged to take the words we use in conversation to the next level, making our speech much more colorful, individual and interesting.

If we are able, we are asked to actually immortalize a word. Is it possible? Yes, it is! We’ll see how a little further on.

Last, but not least, we’re asked to read the dictionary until we find a word we didn’t know. We must then memorize that word and immediately put it to use in our speech and in our writing.

When Is National Word Day?

In celebration of a poet and playwright who has kept many words that would otherwise have become obsolete alive, National Word Day is celebrated on the Ides of March. That’s the 15th of March, the day when Caesar is believed to have been assassinated. This day was immortalized by Shakespeare, keeping the word “Ides” alive, even though it’s usually only used when we read Shakespeare’s play.

On the Ides of March, you get your chance to make a seldom-used word or words immortal. Start thinking which ones you will choose! I think I will go for “rabelaisian,” a word I so seldom use that I had forgotten how to spell it and had to look it up. I like it because it rolls off the tongue nicely, and because it refers to bold, coarse, robust humor which I generally keep out of this blog, but I still enjoy. I would be quite sad if that word died out.

I just did! And if I may say so, I’ve got it off to a good start with this blog post. Who gave me the right to do this? Well, it’s a free country isn’t it? You don’t think I have enough credibility to start a special day all on my own? I probably don’t, but you’re going to help me, aren’t you? What’s in it for you? Absolutely nothing! I won’t even promise you my eternal gratitude for your contribution.

Who’s up for joining me in the celebration? You’d better start preparing now. It’s like Christmas shopping. If you wait too long, all the best words will be taken. Which one will you choose? Make your pledge now, and don’t forget to invite your friends!