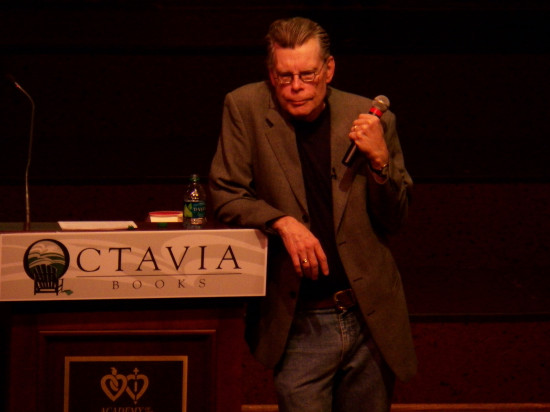 What do you have to do if you want to be a writer? Stephen King answers with a simple formula: read and write a lot. He has no patience for those people who say they want to be writers but also complain they don’t have enough time to read. Voracious reading is a must if you want to be a good writer.

Then if you read enough, a really magic moment will always occur to those who want to become a writer. At some point, you’ll be reading a book, you’ll put it down, and you’ll say to yourself, “This really sucks. I can do better than this. And this guy got published.”

See for yourself and enjoy:

The very first sentence your story begins with should intrigue your reader. Stephen King says it should make your reader think, “I want to know more about this!” I couldn’t agree more. I’ve read books that you have to persevere through before they really grab your interest, but the best ones have been page-turners from that opening paragraph.

Write for Yourself First, Then Think About Your Audience

What would you love to read? If you can write something that would please you, then your story will attract people with similar tastes, and even those with different tastes who would like to experience something different. By writing something you’d love, you’re more genuine and more engaged, and that appeals to the reader far more than something written without passion.

Tell the story first, then redraft it, polishing up the grammar as you go. If you’re going to sit there pondering the “right” way to say something before the idea is fully formed, you may end up saying nothing at all.

Stephen is convinced that timidity is the writer’s greatest enemy. Don’t worry about what your reader will think. Don’t worry because you’re doing something different from the norm. Get out there and tell your story fearlessly.

As mentioned at the top of this article, he believes if you don’t read, you can’t be a writer. The more you read, the more you become inspired. You won’t copy other authors. Instead, you’ll use your own voice. Stephen doesn’t mince his words. According to him, those who don’t have time to read, don’t have time to write either.

Stephen maintains that the TV is a writer’s greatest enemy. Although it’s pretty obvious that having the TV on while you’re actually writing is a bad idea, he says it saps your powers even if you watch TV at other times. Perhaps it’s because watching TV is a passive activity that leads little to the imagination. What do you think?

Three Months Should Be Enough Time to Produce a Decent Book

Although some authors sweat over their novels for years at a stretch, Stephen King says a season should be long enough to get a book written. What he’s saying is, “Don’t overthink this or it isn’t going to happen.”

Don’t answer your phone when you are writing. Don’t have your social media notifications on. Ask your family to leave you alone except if a matter of life or death were to arise. Concentrate on what you are doing to the exclusion of everything else. Create yourself a quiet writing space. Even the radio playing in the background will distract you from your work.

No matter how much you admire the style of other writers, trying to use their style is a recipe for disaster. Develop your own style and be unique. Copy someone else, and be nothing but a shadowy imitation of something that is truly good.

Take a Rest and Reread

Stephen says that a six-week rest followed by a reread of your book will prove enlightening. Distance yourself from your work, and then read it impartially. Your final edits will fall into place naturally.

Learning from other people’s experience is hard to do, but when someone as successful as King offers you the benefit of his knowledge, ignoring it is just plain silly. It makes sense to take Stephen King’s writing advice to heart.