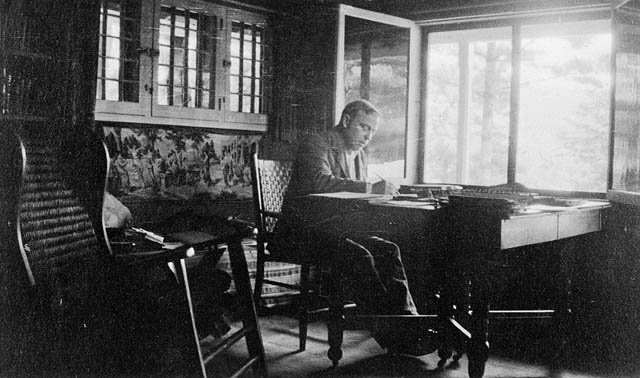 As writers, we all have that place in our house where we tend to be more creative and the words just come a little easier for us. If you are serious about writing as a career or even a side job, it’s extremely important to find this place. It doesn’t have to be anything fancy. Just somewhere that you can think and go about practicing your craft without interruption or intrusion. I find that people tend to impede my writing if I am just sitting on the couch and typing away. They may think that they are only interrupting me for a second, but they may be putting a halt to a flood of creativity that was just about ready to pour through me. And this is just as much my fault as theirs, as I should be in my Do Not Disturb spot while working.

If you don’t have a perfect spot in your house to do your writing in, now is the time to create one. In the film Funny Farm, one of Chevy Chase’s last good ones, he plays a sports writer that moves out into the country in Redbud, Vermont with his wife so he can write the next great american novel. Chase’s character is excited about a room upstairs with a gorgeous view that will be perfect for him to write in. But soon, there are constant interruptions and he can’t write anything substantial. The birds outside his window are driving him crazy. The maniacal mailman is disturbing him enough that he often stops writing completely so he can get his mail and some revenge. They find a body buried in their yard. He starts to go fishing instead of working. And then, he finally gives up on his dream of writing that novel that he has been talking about for years. Don’t let this happen to you. Draw some inspiration from the writing spaces that successful authors have constructed for themselves. You might even be surprised that some very famous authors choose to write outside their house instead!

British novelist Charles Dickens was born on February 7, 1812, in Portsmouth, England. Over the course of his entire writing career, he wrote the forever classic novels Oliver Twist, A Christmas Carol, Nicholas Nickleby, David Copperfield, A Tale of Two Cities and Great Expectations. This is quite a resume of beloved books. For most of them, Dickens would insist on writing at his familiar desk and chair. He felt he did his best work at his beloved desk, and would often have it shipped with him when he knew he would be gone awhile from home. If you are interested in seeing the desk and chair in person, they are on display at the Charles Dickens Museum at the author’s former home in London.

Adeline Virginia Woolf was an English writer born in 1882 who is considered one of the foremost modernists of the twentieth century. She is best known for her novels Mrs. Dalloway (1925) and To the Lighthouse (1927). Every morning she would walk down to the basement and into a storage room with a cozy old armchair that she loved. She would write away sitting in the armchair in her peace and quiet.

Agatha Christie was born Agatha Mary Clarissa Miller on September 15, 1890 in the southwest part of England. The youngest of three children, she was educated at home by her mother who would always encourage her daughter to write. Christie was an author who would churn out classical detective stories at an astounding rate. In fact, she is tied with William Shakespeare as the best selling fiction author of all time. Where did Christie conceive all of her masterpieces? She most often would be sitting in her large Victorian bathtub eating apples as the created the plots to her novels.

Edith Newbold Jones was born into a wealthy New York family, and later in life married a rich banker named Edward Wharton in 1885. After her marriage ended in divorce in 1913, she began to write stories set among turn-of-the-century New York society. She did not have her first novel published until the age of 40. This did not slow her down though, she eventually wrote 38 books. The most well known book was the Pulitzer Prize winner The Age of Innocence. Most mornings, she would write while still covered up in bed. It was her preferred spot. She would have her dog on one side of her, and an ink bottle on the other. Her secretary would later type up all the pages she had written by hand.

Before Stephen King became recognized as one of the best horror writers of all time, he was a struggling English teacher living out of a trailer with his wife Tabitha. She worked at Dunkin’ Donuts on the second shift. King couldn’t even afford his own typewriter, so he used his wife’s as he worked at his makeshift desk that was sandwiched between the washing machine and the dryer. He would literally lock himself in the laundry room to do his writing. It was there that he created his first hit novel Carrie. It just goes to show you, you do not need a fancy spot to complete your writing in. You just need a location that is suitable for you!

E.B. White is best known for writing his book Charlotte’s Web. Everyone loved that little runt Wilbur and the spider Charlotte. White did not believe in picking out the quietest spot to write. He would most often work in his living room as the bustle of life went on around him. He would say that his family never bothered to be quiet as he wrote, they would continue acting as if he wasn’t even around. He once said,  “A writer who waits for ideal conditions under which to work will die without putting a word on paper.” Perhaps you write in a similar environment?

Every serious writer knows who Ernest Hemingway was because he was definitely a like-minded individual. He took his craft seriously. He was well known for novels like The Sun Also Rises, A Farewell to Arms, For Whom the Bell Tolls, and The Old Man and the Sea. In 1954, Hemingway even won the Nobel Prize. He committed suicide on July 2, 1961, in Ketchum, Idaho. He never had a set place where he liked to write, but he did have a time of the day that he favored. Hemingway would often write as soon as it first became light in the morning. He cherished the quietness and the chill in the air. He would usually try to write for six hours a day, and then stop and wait until the next morning where he could continue on with his craft.

Mark Twain had a private study built separate from his house so he could be secluded while writing and also smoke his cigars that his wife hated. Best known for The Adventures of Tom Sawyer (1876) and Adventures of Huckleberry Finn (1885), Twain was a living legend back in his day. He followed his routine for writing almost every day. He would go to his study after having a large breakfast. Once there, he would skip lunch and work without interruption until almost five at night. If the family needed him for anything at the house, they would blow a loud horn and he would come.