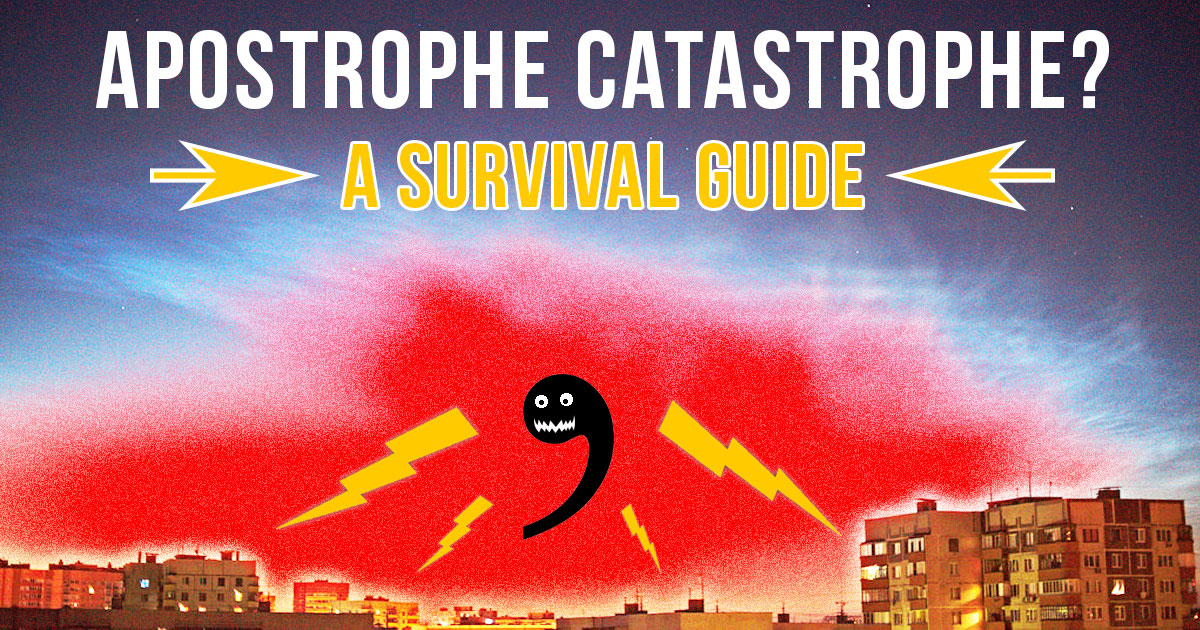 As a teacher that has taught writing to students all the way from elementary to college, nothing can give me more fits than apostrophes. Reading a student’s writing and seeing a misplaced apostrophe can get my blood boiling. I guess I get so worked up about it because we cover it quite a bit during the school year. All the students appear to master using apostrophes correctly when we are doing it together as a class. But once they are turned loose on their own, creating their own stories, the use of their apostrophes confounds me!

Apostrophes can show that something belongs to someone or even something. Let’s look at a few examples below for singular nouns and names.

Those examples show a very common and simple way of using apostrophes correctly. Two of the sentences show people that own things, whether it be clothes or body parts. One sentence showed an animal owning a dish. The other sentence is written about something (a car) and how part of it is damaged. What do all of these things have in common? They are all nouns! The people are proper nouns since we are using their names. The car and dog are just ordinary nouns, but the apostrophe shows that they have ownership of other nouns! Everything involved is a noun!

Quite a few of my students become confused when a person’s name ends with an s. They try just to put the apostrophe right before that s and call it all good. Below are some examples of what should be done with names that end in s and are showing possession of something.

What do all those examples have in common again? They are all nouns showing possession of other nouns! More specifically, they are all singular nouns showing ownership. So far, using apostrophes is pretty simple! However, it is about to become a bit more difficult.

Plural nouns, as all of us know, just means that there is more than one of something. There are a few example sentences down below.

Nothing too difficult so far. Everything bolded in those three sentences are plural nouns. Now let’s take a look at plural nouns that are also possessive, so an apostrophe will have to be used.

Notice how the word is still a plural noun, but since they are also showing possession of something, they are actually possessive plural nouns. When dealing with a plural noun that ends in s and that is showing ownership of something, all that needs to be done is placing an apostrophe after the s at the end of the word.

I know what you are saying though. You are thinking to yourself that not all plural nouns end in s, so what happens then. Where does the apostrophe end up going? Quickly look at the examples down below. It really is quite easy.

Notice that first we made these words plural nouns that don’t end in s. We next had to figure out how to make them plural possessive nouns correctly. All that had to be done was to add an apostrophe and then an s to the words. There aren’t many words that are plural nouns that don’t end in s, but every now and then you will come across one. If you have have understood how to use an apostrophe right so far, give yourself a pat on the back. There is just a little more to learn about apostrophes. Can you think of any words that we have not covered that must use an apostrophe as well?

I had my primary students one time do a quick Google search for contractions when they were struggling with the concept. They struggled a bit more when the top information that popped up was about women giving birth to babies. Not the information I was after. A contraction is also a word created by the shortening and combining of two other words. When making the contraction, an apostrophe has to be inserted to indicate there are missing letters. Below are some examples of contractions.

As you will notice, usually the apostrophe is placed before the last letter. That is not quite always the case, but it is the majority of the time. The common exceptions are when the second word is either have or will.

I have saved the most confusing use of an apostrophe for last. It can make very intelligent adults look less than intelligent on their social media posts. It will have so many hands raised up in the air when presented to a primary classroom. “But I thought you said…” I know! I didn’t create the English language. I don’t understand it either.

Deciding when to use its or it’s is not too complicated once you hear the rules, but until then I have seen people choose heads or tails on which one they were going to go with.

Only use it’s when creating a contraction of it is or it has. Below are examples for a better understanding.

Use its the rest of the time when you are not forming a contraction by combining two words.

You may look at that first sentence about the elephant and say that its trunk should be it’s trunk because it is showing ownership of the trunk. However, that is not the case. Remember, only use it’s when you are combining it is or it has. I know, I know. I don’t make the rules, I just enforce them! Just by reading all of this you have become an apostrophe expert! It is up to you to educate others on the proper usage. Try not to lose any friends while doing so!