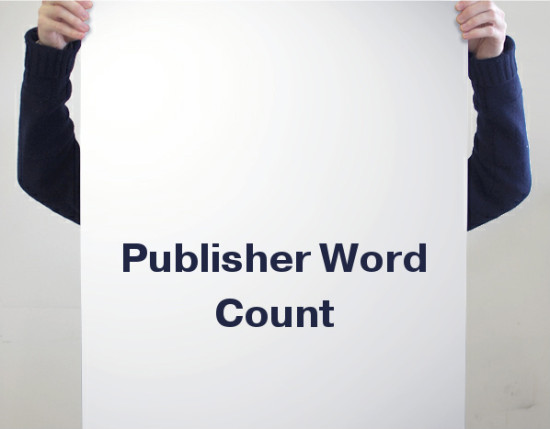 When you write an article or manuscript for a magazine, you’ll usually be asked to hit a predetermined word count. There would seem to be nothing complicated about this. It’s the exact reason we created WordCounter. You place your writing into the text area and you instantly know the number of words you have typed. One would assume that magazine editors and other publishers wouldn’t have any issue with this number. The problem is that they likely will.

Why is an accurate word count not useful to many publishers? There is a simple reason that may not seem obvious at first, but it makes a lot of sense once it’s pointed out. Below is the reason why we decided it was important to include a publisher word count in the details section for those who will be submitting their writing for publication.

Word Counter counts the individual words written. “He is at a big park” is six words. “Supercalifragilisticexpialidocious” is one word. The problem for publishers is the six words take up 19 character spaces (20 if you place a period at the end) while the single word takes up 34 character spaces. While the length of the words will even itself out to a certain degree over the length of one’s writing, each writer will still produce different length articles even when they have the same word count.

When a publisher asks for a certain number of words, they are doing so in anticipation the writing will be the length needed to fill the space allotted for the article. It’s the space the article fills which is of the utmost importance to the publisher, not the actual word count. The problem is that explaining to the writer the exact length can be complicated, so they give a word count and hope that produces writing that fills the space allotted for the article. An article with unusually long words would likely go over the anticipated length, while an article with many short words would fall short of the length needed by the publisher.

To help make things a bit more accurate, there’s actually a publisher’s specific word count. Instead of counting each individual word, publishers have agreed upon the definition that a “word” is six characters long including blank spaces. This solves the issue of words being different lengths and gives a much more accurate estimate of space an article will use as compared to simply counting individual words. Using this definition, “He is at a big park.” would be three and one-third words (including the period). On the other hand, “Supercalifragilisticexpialidocious” would be five and one-third words.

The Word Counter Publisher Count calculates a word to be six character spaces and applies it to your writing to come up with its total. This isn’t perfect for publishers, but it’s a lot more accurate than counting individual words. If you are submitting work to a publisher, you can ask which of the two methods they would prefer when you attach a word count total to your submission.