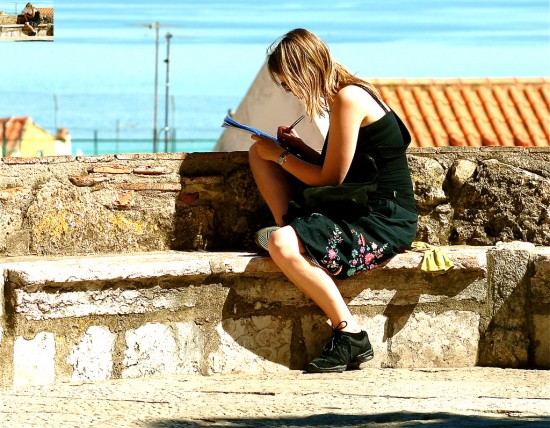 We all have our reasons for writing, but a surprisingly large number of us have probably never articulated them to ourselves. Being a writer isn’t quite like growing up wanting to be an astronaut or a doctor, for example. “I want to go to space,” or “I want to help sick people,” (or “I like mucking around in blood and guts,”) are clear reasons for choosing those occupations. Even, “I want to make a boatload of money,” is a clear reason for choosing something like medicine or law.

But being a writer is different. We may have always felt an affinity for words and reading, but a fair number of us sort of stumbled into writing as an occupation. That’s how I ended up as a writer. One job led to another and then another and before I knew it, I was a writer. I never clearly set out on that path and I never really considered my reasons for gravitating toward this occupation. Obviously if I’d hated it I could have quit, so on some level I was enjoying it. And that may be the only reason I need. But there are so many other reasons to write (or not).

You certainly don’t have to know why you write, but knowing why you want to do this can make it easier to find work, to choose a specialty for your work, to find inspiration, and to know when it may be time to walk away, either from the occupation as a whole or from certain jobs/projects (i.e., if you’ve achieved the goal you set out to achieve and you’re no longer enjoying the work, knowing that can make it easier to say, “Enough.”)

This is obvious. Some people write simply because they enjoy it. They like putting words on paper, creating stories, or informing people. Enjoyment can keep you motivated even if your writing doesn’t generate an income.

To influence people or change the world

Many writers hope to change government policies, raise awareness about issues, or to influence people to consider their point of view on a subject. The ability to change people’s minds about issues and to bring lesser-known issues to people’s attention is a powerful motivator.

Because you love a topic

If you have a passion for a certain topic, writing about it can be a great way to pursue and share that passion. Writing gives you a chance to learn about the topic, to interview people who are experts, and to bring awareness to the topic you love.

Stop laughing. It’s true that forms such as poetry and fiction (unless your name is Patterson or Grisham) don’t generally make a lot of money. But commercial forms of writing (marketing, technical writing, speech writing, etc.) can be very lucrative. Self-publishing can also lead to a respectable income.

Some people write to heal themselves or others. Maybe you’re dealing with grief and you want to sort out your own feelings or help others to deal with their own. Perhaps you want to bring hope to people with chronic illnesses or conditions, or you have an inspirational story to share that will help others heal their hurts and illnesses.

Helping others can take many forms. Some writers feel compelled to help by bringing awareness to an issue, by educating others about a topic, or by helping other people deal with emotions or situations.

To leave a legacy

Many writers want to create something that will live on after they are dead. Very few things are as enduring as a book on a shelf or a scrapbook full of magazine articles.

You’re good at it

Many people do things that they are good at, even if they don’t love it. Writing is a skill and if you’re competent there’s nothing wrong with monetizing that skill, even if it’s not your passion.

To use your creativity

It’s fun to sit at the blank screen or page and fill it. When the day is through, you’ve gotten the satisfaction of having made something. You’ve created something from nothing. You’ve used your creativity to fill that page.

To give something to your kids

To use your brain

Writing is a great way to exercise your brain. It’s creative. Research gives you a chance to analyze data and information. Even the act of writing uses your motor skills. Writing can help stave off cognitive impairment as you age or keep your brain active if your “real job” is mind numbing.

Being a writer conveys a certain amount of respect, particularly if you’re published. Having a publisher agree to put out your book is a form of validation and forevermore you can tell people that you are a published author.

To boost your visibility/credibility in your chosen field

There’s a reason why academics and researchers must publish, even if their primary job is something else. Doing so boosts their visibility and credibility in their field. This applies to almost every field. Writing about your field in magazines, books, and on the web makes you an expert (or at least people think you are).

If you work for yourself, writing is an occupation that generally lets you set your own schedule and work in your PJ’s if you want to. Sure, you may have to agree to some meetings, do some research at the library, or show up for interviews, but your time is largely your own which is perfect for introverts and those who dream of no longer working for a boss.

While few writers achieve the name recognition of James Patterson, J.K. Rowling, or Nora Roberts, many dream of it. Many writers dream of the day when their books are made into movies and the subsequent red carpet premieres, interviews in major magazines, and having Oprah pick their book for her book club.

This is one of the things that attracted me to writing. I’m a huge introvert and I hate anything to do with “teamwork.” Writing is often a solitary occupation which suits us introverts fine.

To answer a calling

Some people feel, “called” to write. Whether it’s to write about a global issue, to preach their religion, or to churn out a novel that changes peoples lives, a calling can be a powerful motivator.

If you write fiction, there’s nothing more fun than naming a character after a boss or bully and then killing them off or torturing them so badly that they beg for death. It’s a legal form of revenge. And in the case of non-fiction, there’s some truth to the saying that a life well lived is the best revenge. If your writing is meaningful to you and others or if you become famous, it’s a subtle way of sticking it to those who tried to hold you down.

Because someone else said you should

Maybe writing isn’t really your thing but your parents or teachers always wanted to see you as a writer. It’s not my first choice reason for becoming a writer, but many people choose occupations to please others.

It can lead to interesting opportunities

Writers, more than any other occupation I know, have some of the most interesting opportunities drop into their laps. Travel writers get asked to visit new and exciting destinations. Technical writers are sometimes asked to play un-released games or test software. Reviewers get great books to read. Writers who are experts in their field get asked to appear at conferences and conventions and maybe give a speech. Some get to meet cool fans, are asked to ghostwrite something interesting, or are asked to contribute to larger works like anthologies.

Many writers hope to educate others. Non-fiction is a great way to teach others how to do things, but fiction can also teach, albeit in a more subtle way.

You can’t do anything else

If you’re unclear about why you write, take some time and figure it out. Knowing why you write will make many aspects of your writing life much easier and rewarding.