If you’re looking to kill a little time using nothing but a pen and paper to entertain yourself and a friend, you have several options. One is the tried and true word game “Hangman.” In the unlikely event that you didn’t learn this game years ago, here’s how it’s played.

One player chooses a word and draws a series of dashes for each letter in the word. The other player tries to guess which letters are used in the word, and the first player fills them in with each correct guess. If a guess is wrong, the iconic image of the stick man hanging from a gallows begins to appear stroke by stroke. Rules on how the hanged man is drawn vary, but this generally allows for a maximum of 10 wrong guesses.

Do you want to defeat your friends at Hangman? Choosing words that are difficult to guess gives you the edge. According to veteran players, the ones listed below are some of the most difficult.

It only has four letters, but it’s as tough as nails to guess. The reason why this one is so hard is that it includes two of the letters least used in the English language, namely J and Z. Be hated and feared by choosing this tough nut.

This word makes use of the same strategy, and if your friends start to see a pattern, they’ll begin by choosing a Z ending just to see if you’re still up to your tricks. Choose a few easy words before you use this one!

By now, your friend is ready to throw their pencil at you and march off in a huff. Remind them that it’s just a game, while you secretly smirk at your own sneakiness in finding out which words are trickiest because you love to win at absolutely everything. By the way, “jazzing” is also a good choice as is “buzzing” and “buzzes.”

Use your double zee words sparingly, and you can add “fizz”, “fuzz” and “dizzy” to your list, choosing as many permutations as your evil little mind can dream up. But you need more than just zees to make you a winner.

As hangman word choices go, this one is absolutely brutal. Its success lies in the double J ending and the fact that unless your hangman partner is savvy about Muslim culture, he or she probably wouldn’t know how to spell it. Unfortunately, there aren’t any other words with a double J ending, so that’s as far as you can go with this one.

Words with a Double F

“Faff,” “duff,” “buff,” and “puff” are words that will expand your strategy of choosing rarely-used and seldom-guessed letters. Once again, feel free to add plurals, put verbs in the past tense, and so on.

Do you sigh every time you pick the letter X when playing Scrabble? Turn it into your hangman friend with words like “jinx,” “vex,” and “fox.” Other words with X in them such as “six” may be too easy because they’re frequently used words, so stick with the more obscure choices.

Put the double whammy on your opponents with unusual words that also contain less common letters of the alphabet. Below are a few examples you can place into your Hangman arsenal:

If you’d like a whole arsenal of nasty hangman words to make your friends hate you, look no further than words people often misspell. Even if they get several letters right, they may not get the correct answer.

Words with Y as a Semi-Vowel

Most people go into a Hangman game assuming there will be a vowel in the word you’ve chosen. You can use this assumption to your advantage by choosing words that use the letter Y in place of a vowel. “Gypsy” and “rhythm” are both words that will likely frustrate your opponent to no end. You can also try pushing your luck with words like “hmm,” but it really is taking a bit of a chance, and you may just be accused of cheating.

Words Ending in the Letter Q

Choosing words that contain the letter Q will make guessing the word more difficult, but if you really want to take it up a level, pick a word that ends in the letter Q. Warning: if you decide to do this, the person you play with will likely start throwing random objects at you.

I’ve left the most annoying choice for last, and if you use this one, you had better have on your running shoes. By now, your friend is already questioning whether he or she wants to remain your friend. This is a good one to use when you’re ready to finish the game since nobody will want to play with you after you use this word. 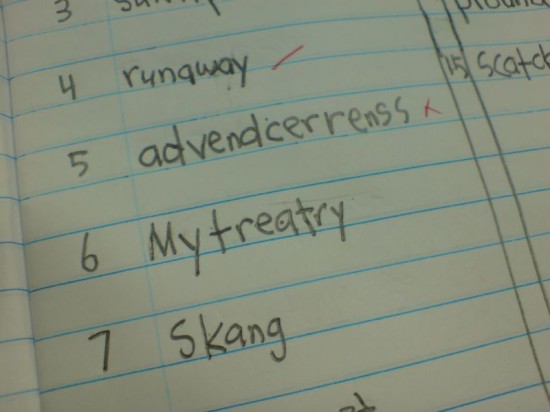 We love spelling in the US. We’ve even turned it into a competitive sport, but that doesn’t mean all of us know how to spell. While many of us rely on spellcheck and autocorrect, this can sometimes lead to unintended issues.

Some words are plain tricky, and even our cousins in the UK (which invented many of the tricky-to-spell words) have similar difficulties. Words that are spelled phonetically present the fewest problems. It’s the ones with strange letter combinations, silent letters and double consonants that are among the most difficult, and it’s hardly surprising that they give people headaches.

An Embarrassment in Spelling

“Embarrassment” with its double r and double s was chosen by British survey participants as the word they found most difficult to spell. I agree that it is an awkward one. I actually keep a list of words I often misspell near my computer, and I have to confess to my “embarrassment” that this word is on the list. Why do I keep a list of words I struggle to spell? So that I can learn them, of course. Everyone should have one.

For those interested, below are the rest of the UK top ten hard to spell words consists of:

I’m happy to say only four of these are on my list, but “necessary” was only taken off it a few years ago. As a spelling exercise for our British brethren, I suggest that they write the following sentences one hundred times without spell-check or autocorrect enabled:

“I occasionally see a psychiatrist about my inability to accommodate the rhythm of necessary chores. If my home were a minuscule bit more organized, I wouldn’t blush fluorescent pink with embarrassment when my mischievous brother comes to visit.”

Admittedly, being Brits, they’d best use the British spelling for “organized.” Although most British people tolerate American spelling well, it infuriates some of them, so if you are British, use an s instead of a z.

Google gets asked lots of questions, and it also gets asked how to spell words. The top ten words US Internet users asked google about were:

How did you fare with this list? I’m happy to say I only have difficulty with two of them, and hors d’oeuvres was discussed in a recent blog post, so I think I’ll remember how to spell it now.

Based on Google searches, Idaho residents were either the worst spellers or those who were the most concerned about their spelling. Whichever the reason, they asked Google the most spelling based questions.

Google also had a go at working out which words bothered people living in different states most. Some of the results are quite interesting, although what we’re to do with this knowledge remains a mystery.

For example, if you live in Hawaii, not being sure of how to spell “Pterodactyl” keeps you awake at night. On the other hand, residents of Georgia are most worried about how to spell “Pneumonia.” Those living Sunshine State know so little about bad weather that they aren’t sure how to spell “grey.” Then there are Maine residents. They want to let us know they’re fed-up, or so it would seem. Their most googled spelling question was for “frustrated.”

We’re not too unlike the British in our spelling vices. More than 60% of Americans can’t spell the “e-word”. Other words that confuse us include:

The one thing we can console ourselves with is that everybody has words they’re not confident about spelling. After all, how are we supposed to know the breed of dog that’s pronounced as “Chiwawa” is actually spelled “Chihuahua?” If we were to pronounce that in the way the series of letters suggests, it would be “Chee-who-ah-who-ah”, and that’s exactly how I remember the correct spelling. Somewhere in my head, there’s a little circuit that remembers it in its phonetically pronounced form.

There’s a school of thought saying we should be given leeway to spell things logically. Before the invention of printing and the development of the first dictionaries, there were no real spelling rules. On the other side of the argument, some are pushing for even greater standardization. But since this would mean either the Brits or the Americans would have to give up their form of spelling, it seems unlikely this will ever happen.

As a final consolation, you should know that some of the greatest writers in history were very bad spellers who relied on editors to pick up their errors, so if you struggle to spell certain words, you’re in good company.